Diane Keaton in Something's Gotta Give is just as adorable as all the reviewers said, but I'm afraid Jack Nicholson's charms escape me. In fact I had a nightmare about him that night. There was not one believable minute in that movie, and I so wanted to like it.

Love, Actually was equally bad but at least it wasn't trying to be anything other than what it was. Still, it wasn't good enough to really enjoy.

Elegance was bad too, though I read it all in one sitting and managed to watch the movie as well. I'm sure it will be a big hit when it is released here. The writing never manages to rise above women's magazine depth, though the reviews promised it would be edgy and classy. The narrator, an American living in London whose life is improved by an old advice book about fashion, just seems whiny, cranky and narcissistic. Her two best friends are a gay man (for fabulousness) and a chic "spinster" (for levelheadedness), so neither one will compete with her in her quest for princessdom with her dream guy, who turns out to be both independently wealthy and artistic.

Anyway, it was nice to get away and get lost and be invisible for a little while after so many demands on me this winter.

Read Roy's excellent account of his tour of England


The Weather Project at the Tate Modern 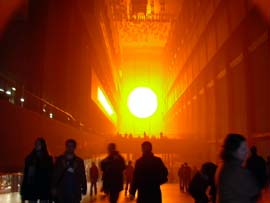 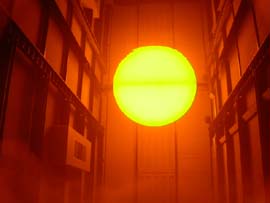 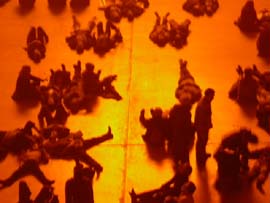 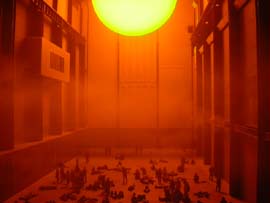 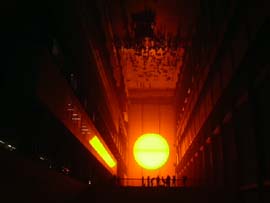 Long walk in West London from Kew to Hammersmith along the Thames - pictures later. Dinner with brother Brian who made me drink a cappucino late at night so I didn't get any sleep.

From TV - Only 2% of soldiers in World War II actually shot to kill.

Interesting, but how do they know that?

Normally I like to stay away from Americans when I'm not in America - but I couldn't resist the chance to see some "prototypical east village punks" in the east end. Plus I got to experience, as the token bemused adult, the mad dash for the last tube with a crowd of drunken teenagers.

Also, I watched a tv program called Status Anxiety, supposedly about consumerist culture, but really about the ruthlessness of meritocratic culture in the US which is taking over the UK and Europe. The best thing the guy had to say was that, instead of thinking of yourself as a loser (as I do, especially by New York City standards), think of life as a cruel joke. Maybe circumstances are unbudgeable.

His other suggestions were religion or being a hippie, or a nudist. I'll take unbudgeable circumstances and the cruel joke idea, thank you.

WFMU's beware of the blog

bird in a tree