No more helicopters, no more sirens.


I've avoided reading this Neal Pollack guy, because there was too much hype, especially from gawker, but this is really a great line:

It’s with great sorrow and greater pity that I announce that I cannot support President Bush, whose image I have masturbated to countless times, this fall.

And a good little essay.

Setting up an event in this battleground state that was attended by 15,000 cheering supporters of Kerry and running mate John Edwards was one of several postconvention tactics the Kerry campaign disclosed yesterday. It was hoped the stategy would pay off with today's morning news shows including coverage of the rally on a day when the networks would otherwise be airing only excerpts of the Bush speech.

Thanks to Roy for finding this.

And it's very frustrating to hear RNC delegates and their followers keep saying "It's like these New Yorkers have forgotten 9/11."


The constant helicopter drones and sirens are starting to get to me.

Noche now has about 15 former Windows [on the World] employees, from Ramon Lorenzo, a dishwasher, to Joe Amico, the general manager. They listened quietly to September 11th chatter at Sunday's gathering of Missouri Republicans, and at Monday's Republican Governors Association party, where Mr. Johnson served wine, Mr. Rojas worked the penthouse bar, and Monzur Ahmed and Ahad Ahmed kept the buffet tables clean and inviting.

A coworker and I went over to the protest at FOX News. It was just a big crowd of people, mainly bored office workers. We got flyers for everything from a strip club to "Chris P. Carrot for President" (promoting vegetarianism) to a Pocket Guide to Stopping a Police State.

Stumbling down 44th Street towards Sardi's was a drunken looking elderly gentleman with longish white hair, wearing a light gray suit and an elephant motif tie and a big button that said "Kiss Me I'm A Republican."


Exploring the limits of my dorkiness last night, I went to a panel discussion put on by New Democracy Project. Paul Krugman, Sidney Blumenthal, Craig Unger and Joe Wilson were the panelists, so I might as well have stayed home and read political weblogs, but it's kind of interesting to see these people in the flesh.

Joe Wilson, in particular, is much more impressive than I thought he would be. Very smart, very intense (not to mention quite handsome in person). This guy clearly does not let go of a grudge and knows how to get things done.

I also learned the correct pronunciation of Niger (nee-JAIR).

I just went out for lunch and this neighborhood (44th and 8th) is crawling with delegates! I have to remember to wear my buttons whenever I go out! Who cares if they clash with my outfit.


If you want to keep up-to-the-minute on all the little rumblings about town, check out NYC Indymedia.

Images from the United for Peace and Justice March 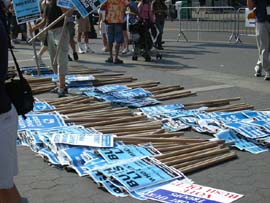 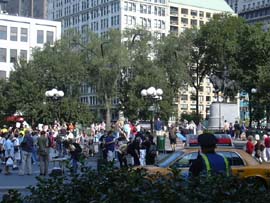 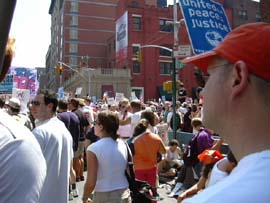 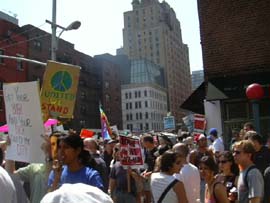 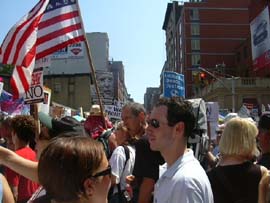 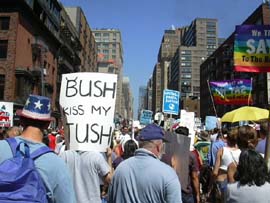 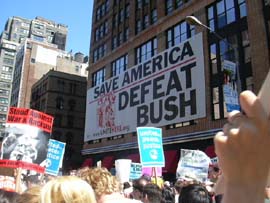 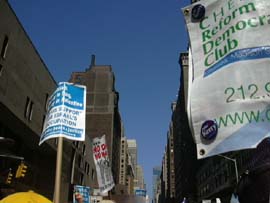 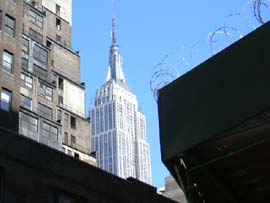 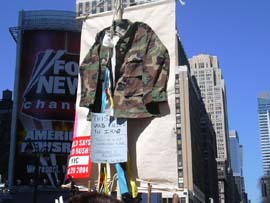 WFMU's beware of the blog

bird in a tree